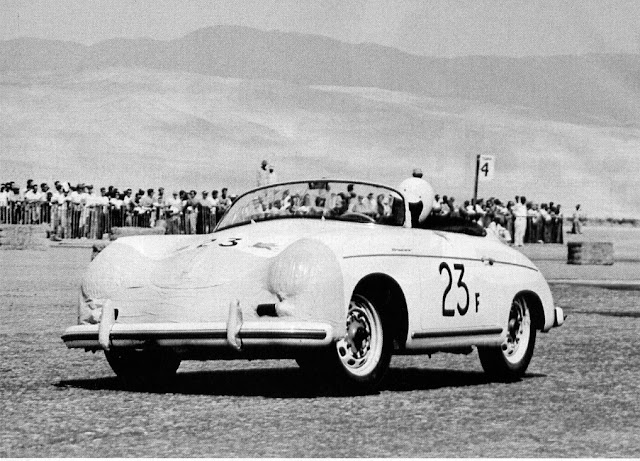 Just months before dying in a horrendous on-road accident, a handsome young James Dean drove his Porsche Speedster in the SCCA/Cal Club/Long Beach MG Club Palm Springs Road in the desert just east of Los Angeles. Dean competed in the under 1500cc F-Production category. Even tough it was ostensibly an amateur meet, there were many big-game pros driving that weekend, in a interesting variety of stock class and purpose built race hardware. Dean, listed in the program as "Joseph Dean" in a vain attempt to maintain anonymity_ or at least not to attract so much attention_ acquitted himself well that weekend, driving his white Speedster to a second-in-class finish.

Interestingly enough, Steve McQueen launched his racing career at an SCCA meet in Santa Barbara in a nearly identical machine, except McQueen car was black.

By early 1955, Dean already was established as an up-and-coming young actor and a racer of some ability. He sold this car to purchase the Porsche 550 Spyder _as a racing machine, it was a step up from the Speedster_ in which he would die in Central California on September 30, 1955. Another connection in between Dean and McQueen is that they both use to street race at night on legendary Mulholland drive trough the Hollywood Hills. The late singer and actress Eartha Kitt was one of the Dean's friends and often accompanied on those midnight rides. Shortly after his untimely passing, his third and final major film, "Giant", hit the silver screen, forever ensuring his cult status.

original article from motortrend.com
Posted by MoVilla at 8:22:00 PM