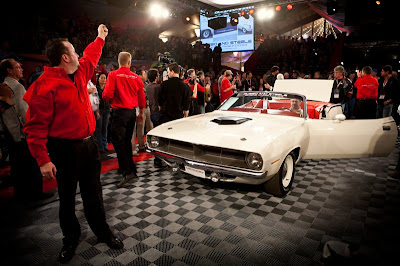 The story behind the sale
The 1970 Hemi 'Cuda convertible has been the Holy Grail of muscle car collectibles for quite some time. With only fourteen built in total, nine of which were automatics, there has never been an oversupply of then on the market. that is, of course, until the great muscle cars price collapsed of a few years ago.

Proceeding the current recession, muscle cars had exploded in value. Reported prices for '70 Hemi 'Cuda convertibles handily exceeded $2 million, and '71 models approached $4 million. At that point the music stopped and a number of people who thought that values would go up forever learned a very hard lesson.

Muscle cars in general have been beaten down, in some cases to the point they have become bargains. No one will call this Cuda a deal at $1,705,000, but for a lot less dough that what these cars were "worth" a few years ago, some collectors and investors must think it's time to jump back in.

Unlike many collectors cars that have a worldwide following, this cars fan base lives almost exclusively in North America. 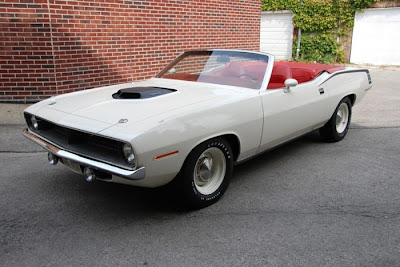 SN BS27ROB363502
White with black top over red vinyl 425-hp, 426 cubic-inch V-8, automatic Paint loks quite similar to factory quality, wich is to say lackadaisically applied. Excellent bright-work. The interior appears to have been expertly replaced with correct materials. A full rotisserie restoration of an extremely rare and desirable model

from automobilemag.com
Posted by MoVilla at 10:33:00 AM