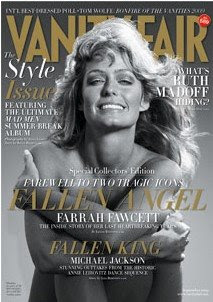 Farrah Fawcett and Ryan O’Neal were the Angelina and Brad of their day—dazzling sex symbol meets Hollywood hunk—until their stars were tarnished by drugs, infidelity, and family pathology. In the last days of Fawcett’s life, as cancer stripped the masks from an all-too-human drama, contributing editor Leslie Bennetts shared O’Neal’s vigil, learning the true struggles and breakthroughs of their 30-year romance.

The truth was that Fawcett had always been more complicated than the clichés, the realities of her life far darker than the sunny image she projected. The gap between her public image and private reality was wide: “I’m always more comfortable when I have on hardly any make-up, my hair is brown and I’m very unattractive,” she said.

The work that brought her solace in later years was a love of art that had nothing to do with fame, a private passion that inspired her to sculpt female nudes with an obsessiveness that seemed like an attempt to understand the world’s fascination with her own body. The documentary [Farrah’s World] that became her last appearance violated every rule of Hollywood image-making; no other star had ever exposed herself to a viewing audience while moaning in pain, vomiting, and losing her famous hair to chemotherapy. But Fawcett’s final triumph was to integrate the public and the private at long last, imbuing her death with a larger meaning and finding redemption in baring her head along with her soul.

Fawcett’s private reality was dominated by her three-decade relationship with O’Neal, an Oscar-nominated actor with a well-earned reputation as a Lothario. She and O’Neal met in 1979, split up in 1998, and then reconnected in 2001, when he was diagnosed with leukemia. “We pulled apart, but we never popped loose,” O’Neal told Bennetts.

O’Neal cites several reasons for his breakup with Fawcett, starting with menopause. “I believe Farrah was going through some kind of life change,” he says. “I didn’t have a change of life. I was always a jerk. But they’re hard work, these divas; I was sick of it, and I was unappreciated. I just don’t think she liked me very much. So I excused myself, and I was lucky enough to meet this young girl. She was more a daughter to me than a lover, and my own daughter had flown the coop, so here was this replacement.”

Leslie Stefanson, a beautiful actress less than half his age, may have been a daughter substitute, but she and O’Neal were in bed together at his Malibu home when Fawcett made a surprise Valentine’s Day visit and walked in on them. “It was terrible,” O’Neal says. “I didn’t expect to see her down there. I tried to put my pants on, but I put both legs in one hole.”

While it’s clear that O’Neal is no angel, he’s at least willing to cop to his own flaws. At one point, he describes himself as “a hopeless father” and offers as evidence this anecdote from Fawcett’s funeral:

“I had just put the casket in the hearse and I was watching it drive away when a beautiful blonde woman comes up and embraces me,” Ryan told me. “I said to her, ‘You have a drink on you? You have a car?’ She said, ‘Daddy, it’s me—Tatum!’ I was just trying to be funny with a strange Swedish woman, and it’s my daughter. It’s so sick.”

“That’s our relationship in a nutshell,” Tatum said when I asked her about it. “You make of it what you will.” She sighed. “It had been a few years since we’d seen each other, and he was always a ladies’ man, a bon vivant.”

Leslie Bennetts, who has profiled everyone from Jennifer Aniston to Michelle Obama, offers many more revelations in “Beautiful People, Ugly Choices.” To read the whole story, pick up a copy of the September 2009 issue of Vanity Fair, available on newsstands in New York and Los Angeles on August 5 and nationally on August 11.