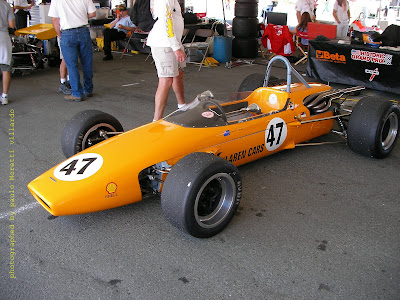 In 1967 McLaren's chief designer Robin Herd was given the task of producing new cars for Can-Am and Formula One and Formula Two.The Formula 2 car, designated M4A was simple bathtub type monocoque. One of these cars was built at the McLaren factory for New Zealander Graeme Lawrence who campaigned it successfully in Europe for a season and then for many years after, in New Zealand. Other notable drivers who raced McLaren M4As in New Zealand after 1967, were Jim Palmer, Ross Calgher, and Piers Courage.

This car was photographed in Sonoma County, California at Sears Point - Infineon Speedway in 2007.
Posted by MoVilla at 9:29:00 PM