The 1965 Mercer Cobra would never have been built had it not been for the Copper Development Association, which wanted to show the practical modern uses of copper in automobile design. But it certainly would not have looked the way it did were it not for Virgil M. Exner and his son, Virgil, Jr., who transformed it from concept to reality. 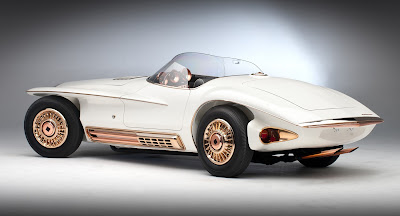 Mercer-Cobra to cross the block in Monterey

Funded by the Copper Development Association and built by Carrozzeria Sibona-Bassano of Turin, the Mercer-Cobra was finished in late 1964 and whisked off to a world tour promoting the CDA. It has since appeared in the pages of Special Interest Autos (SIA #39) and graced a number of noteworthy collections, and now RM has announced that it will go up for sale at its auction in Monterey next month with a pre-auction estimate of $800,000 to $1.2 million. From the auction description:
In the case of chassis number CSX2451, the Copper Development Association’s president, George M. Hartley, spied the Exner concepts on the pages of Esquire and contracted with Exner’s company to complete the design and have it built. With Ghia in financial trouble, Exner looked elsewhere for craftsmen capable of faithfully rendering the Mercer’s design features in metal. Brooks Stevens recommended Carrozzeria Sibona-Bassano in Turin. The company had been established by Elio and Emilio Bassano around 1962, but its capabilities and prestige were substantially augmented in 1962 when Pietro Sibona, one of Ghia’s master metal workers, joined them. 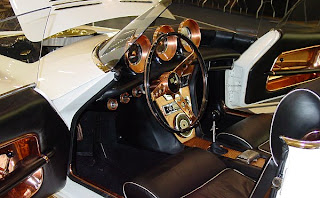 Exner and his son and business partner, Virgil M. Exner, Jr., completed the design utilizing a chassis from AC Cars in the U.K. to which Sibona-Bassano faithfully and accurately adapted the design. Cobras were popular choices for specials builders and movie studios, as their series production and Ford-based drivetrain kept costs down. The ladder-frame construction was adaptable to almost any special bodywork and easily lengthened for specific appearance. AC easily pulled chassis off the line before bodies were mounted and supplied them in nearly ready-to-run condition for rapid modification and construction; in the case of the Mercer-Cobra, the chassis was lengthened to 108 inches. 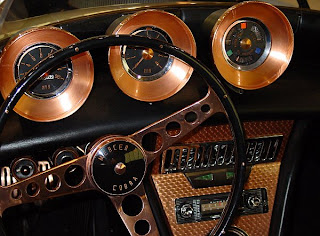 Surviving period photographs which exist in the archives of the Henry Ford Museum show the clay model of the Mercer-Cobra in exceptional detail. Also in this collection are patent applications for the design of the body, as well as dramatic photos of the senior Exner supervising the design process. This collection of documents also indicates that the project was quite lucrative for the accomplished Exner; though the Cobra underlying the Mercer cost $2,800 with a total delivery price to Turin of $3,019 and the agreed price with Carrozzeria Sibona-Bassano for the delivered coachwork was $10,400, the contract with the CDA was for a total delivery price of $35,000.

The Copper Development Association’s Mercer-Cobra exploited the dramatic colors and textures of copper and copper-based materials to its advantage, particularly with the Brass-Era theme of the Mercer. Some eleven different materials, alloys and finishes were employed in both the interior and exterior to demonstrate the diversity of copper and brass. Exner’s design emphasizes the long hood and pushed-back passenger compartment with long blade-style front fenders open along the hood sides, abbreviated rear fenders with separate mudguards behind the rear wheels and a long, tapered rear deck. A classic-style brass grille with eight large elements in front of mesh stone guards proudly leads the Mercer-Cobra’s design statement. The headlights are ingeniously mounted on pivots where they swing back flush with the sides of the nose when not illuminated. Exner later observed, “our overall aim was to create an interesting and stimulating design rather than one which simply follows the ‘formula’ of a flat, low snout with a horizontal air scoop and a squared-off bobtailed rear.” 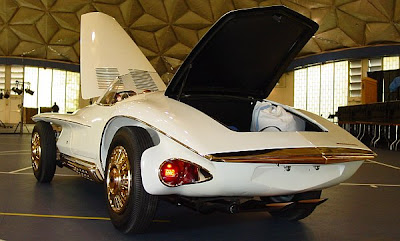 For practical purposes, brass and copper elements were covered with an acrylic coating to prevent discoloration and exterior moldings made of silicon bronze. The taillights are recessed in brass tunnels integrated with the rear-wheel mudguards. Interior trim, seat backs, door panels and dashboard gauges are executed in copper while a high-strength chromium-copper alloy is used in the steering-wheel spokes. The 16-inch wire wheels have multi-piece brass covers. Chrome plating is used deftly but sparingly throughout, mostly on a brass substrate, to accent the richness of the brass and copper elements. The engine has been given the brass and copper treatment on the valve covers, air cleaner, oil filler cap and dipstick housing. This treatment continues in the silicon bronze heat shield protecting the body and passengers’ legs from the chrome-plated side exhaust pipes. Even the brake discs are made from copper alloy where the high heat-transfer rate promotes exceptional performance.

Finished in pearl white with black leather interior trim and a full-width curved Plexiglas windscreen, the Mercer-Cobra was toured throughout the world at shows and technical gatherings to promote copper and brass use and adaptability, making appearances on six continents. Delivered in late 1964, only a year after the decision to construct it was made, the Mercer-Cobra attracted worldwide attention, including a lavish six-page feature in the Winter 1964 issue of Automobile Quarterly. It was retained by the Copper Development Association for some ten years, demonstrating what an effective device it was in promoting the objectives of the association members. 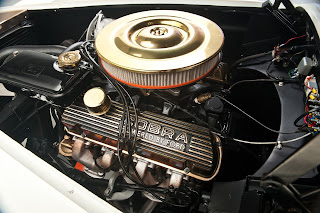 Chassis CSX2451 was purchased by concept-car collector Joe Bortz in the early 1970s and was later owned by collectors Jim Southard, Al Wright and Tom Barrett. It has been owned by the Lyon family since 1989 – over 20 years. Although it was never intended to be driven, it is a running, driving functional automobile, still essentially as it was when it left Carrozzeria Sibona-Bassano in late 1964, right down to the original tires. Recently the Mercer-Cobra concept car was displayed among a group of concept cars at the Pebble Beach Concours d’Elegance. Not only is the Mercer-Cobra Roadster an important piece of America’s automotive design history, it is a rare surviving work by one of the great automobile designers of the 20th century, Virgil M. Exner. Designed solely by him and his son and built under their direct supervision, every facet and design detail reflects his concept and ideas and is a singularly pure statement of his vision.

Email ThisBlogThis!Share to TwitterShare to FacebookShare to Pinterest
Labels: 1965 Mercer-Cobra